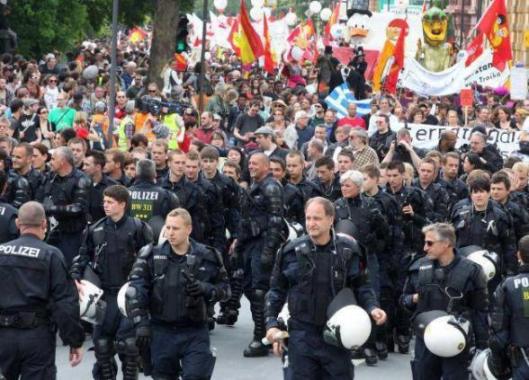 Frankfurt city police took off their helmets and marched with protesters against Rothschild Central Bank. – Frankfurt Germany Saturday May 19, 2012.

The European Central Bank’s 1.1 trillion-euro quantitative easing program has sent bond yields to below zero on securities from Germany to Spain – which is having a negative impact into German bunds.

Germany’s government uses bunds to finance its spending. Long term bonds, those with durations of between ten and 30 years are issued the most. Bunds are auctioned off in the primary market and then traded in the secondary market. According to Jefferies this means that more than 30 percent of all government debt in the Eurozone is trading on a negative interest rate.

Yarn, Yorkshire and All Manner of Wonderful Things!