Thank you, Anna, for sending this. I finally got a chance to read it. Fascinating!

This may explain why Cobra maintained it was “just a comet”. The allies didn’t want the world to know what was going on, obviously, or it could compromise the operation.

It also explains my feeling that it was a very special “comet”, bringing gifts for Humanity.

I hope that those who harbour fear around our future will find solace in this information as it illustrates the heights our star families have been striving for to bring about our salvation from the dark cabal. This mission has been planned for millennia and will not fail.  ~ BP 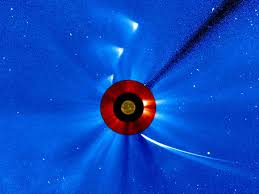 MAARTEN HORST: Yes, my dear friends! My dear friends, my dear fellow starseeds and fellow human beings! Welcome to ET FIRST CONTACT Radio! Tonight we have a very, very, very important show, a very important show with my guest Alkesh who was last Thursday on BBS Radio and if you watched the interview or listened to it on YouTube [https://www.youtube.com/watch?v=awPWtEIRmUw] then you are up-to-date.

It started all with the video that Esoteric Golden Spirit made a couple of weeks ago and has gone viral [Comet Ison. The Event. The Truth About It – https://www.youtube.com/watch?v=nYXZCz_2Rcg]. So tonight we are going to share very crucial information and as far as I know and as far as I resonate with this information, it is the closest to the truth from all information available on the internet until now. So I want to welcome my dear friend Alkesh which is his star name for ET FIRST CONTACT Radio. Welcome, Alkesh!

MAARTEN HORST: It’s a great pleasure to have you again on the show, my friend.

ALKESH: Yes. From my part too.

MAARTEN HORST: We have worked day and night, you and me to prepare this show and to prepare the YouTube video from the last Thursday interview and I want to tell the dear listeners that from this interview there will also be a YouTube version available. But if you can listen now, stay tuned because now is the energy and the information that is coming through the airways, from the internet, so now’s the moment to tune in and to listen. So I want to welcome everybody again with love and light and harmony and if you are ready, Alkesh, I will start with the first question.

ALKESH: Yes, I am ready Maarten. I am listening to you.

MAARTEN HORST: Ok. Well, of course we have spoken about comet Ison that it is a spaceship and the details about it you have explained it…

MAARTEN HORST: Ok. What about the extraterrestrial spaceship which surrounds comet Ison? Can you elaborate on this?

ALKESH: Yes I can. Well, regarding this spaceship and as far as we were told and shown it is a huge spaceship. However, not nearly as large as the Sirian mothership Anais which is truly huge. The ship that surrounds the core of comet Ison it is also in the etheric plane and is spherical consisting of radial segments. Many beneficial extraterrestrial civilisations which are involved in this grand plan linked to the comet Ison contributed to its design and construction. Therefore, the ship exists in the etheric plane, and I mean in the subtle 4D, I mean the 4th dimension, and cannot be seen in the usual way. Its role it’s fundamental from an energetic viewpoint and it is the basis of support for the very complex plan that has been designed to achieve the vibrational jump of Earth and of humanity as well in a higher dimension of existence. Some aspects of this I have spoken about in the previous interview, you know.

However, they – the extraterrestrial beneficial beings – wanted the best preparation of our planet and human beings in order to be able to deal with the illuminating energetic impulse of the event when it will take place. So they opted for a comet. A comet which astronomers after they saw it in the sky, called it Ison. This choice of the beneficial extraterrestrial was based on the fact that the comet was already “dying”. Its nucleus was very small and the quantity of ice was also small. The comet was heading directly into the sun and following for the last time its path to it.

The extraterrestrial beings who are very evolved spiritually and technologically… they do not wish to break universal laws, and that is why they used it in their plans which are actually integrated in a divine way in the universal harmony. They do not want to disrupt this harmony so that the comet can fulfil the plan. That’s exactly what they used in this case… using the opportunity of the comet whose existence was near to its end actually. Not only that, but in a certain way the extraterrestrials have “revived” it. In other words they have extended its life but they also have respected perfectly its trajectory towards the sun by integrating all related phenomena in a natural way.

After the revival of the comet of rock and ice into the “intelligent” alloy which I have spoken about – in fact, it was more a kind of intermingling so to speak with the rocks and ice of the dead comet; it’s just like water flows through or into the pores of a dry sponge. So after this genuine revival the metal core constituted the centre around which the extraterrestrial ship was built in the etheric plane. However, the observers and astronomers on Earth, they had to see an ordinary comet with a tail which also had to be bright. Brightness was not a problem because the metal alloy had a slightly dark silver grey colour but with regard to the tail which as you know represents the distinctive mark for each comet, this had to be manufactured because there was not enough raw material from the old comet to be generated naturally. In addition the rock and ice were mixed with an “intelligent” metallic alloy.

To create a tail on the comet of a few million kilometres… usually, you know, a comet has a tail of about 3-4 even 5 million kilometres long… to create such a tail, obviously is not at all easy. To do this, in addition to the etheric spherical ship surrounding the core of the comet they also designed and created two other huge, cylindrical ships with a length of approximately 20 kilometres each, as they were shown to us. They were placed behind the main spherical ship around the comet and their role was that of like the vacuum cleaners and also to forcefully push material out behind them and thus create the tail of the comet.

So, in a way it was an artificial procedure to create such a tail. The metallic core, as I have said, is characterised by an extraordinarily strong magnetic force; due to the increase in the mass of the comet and due to the accentuated magnetism of its new core the raw material around it was ionised so to speak and tended to be captured and rotate in this magnetic field around the comet while moving through space.

But think about: if this have been observed on earth it had given birth to suspicion and many unanswered questions. Astronomers would have asked: what kind of a comet is this around which material orbits? For this reason another role of the two huge cylindrical vessels placed on either side of the spherical vessel – I mean, around the comet – was to demagnetise the raw material and push it backwards thus forming a long tail of more than 1 million km. And this is what happened. The comet was photographed as you know from Earth, by astronomers from multiple angles and although it looked like a comet these anomalies were also observed such as the two huge cylindrical ships like some turbines which adorned it so to speak. And until reaching the sun, comet Ison maintained its regular trajectory giving the impression that is nothing abnormal with it. But, however, there were enough photos that captured somehow the anomalies, in particular the presence of the two cylindrical ships next to the core of the comet. They were captured in many photos. However, the really interesting aspects start here, near the sun. So, Maarten, that will be all the information I can tell you about what you asked me regarding the extraterrestrial ship that accompanied comet Ison.